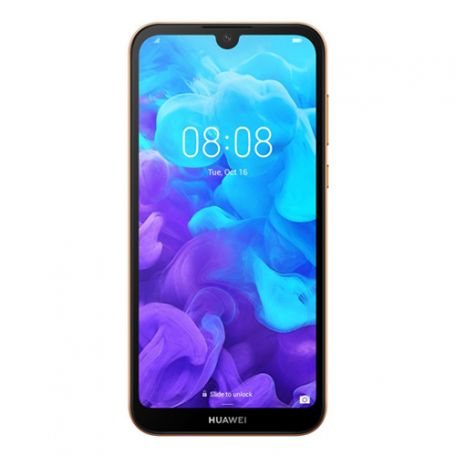 The world’s second-biggest smartphone manufacturer, Huawei has released another smartphone, Huawei Y5 (2019) to its overflowing list of devices. This mobile phone continues the brand’s goals of delivering cool phones at dirt cheap price tags. It is the direct successor to the Huawei Y5 Prime (2018). As expected, it comes with tonnes of upgrades, yet, you don’t have to shell out a lot of coins.

One of the most notable upgrades can be seen in the outlook. Trimmed bezels are balanced together with the teardrop notch to deliver an attractive appearance. The Huawei logo is written on the chin, to remind those who have forgotten the manufacturer of the device.

Turning to the rear, you’re greeted with the smudge-addicted plastic covering. Its lack of fingerprint sensor signifies that the camera setup and Huawei logo are the tenants of the rear region.

Watching multimedia content on the smartphone is made more enjoyable with the 19:9 aspect ratio found on the 5.71-inch IPS display. The clarity of its output is defined by the 720 x 1520 pixels and 295ppi density.

Well, the power sector of the smartphone is governed by the 3,020mAh non-removable battery. In a bid to cut costs, Huawei excluded the Fast Charge tech. This implies that you’ll spend almost three hours to ensure your phone gets refilled whenever it runs low.

Taking pictures on this budget-centric smartphone isn’t bad as you have a 13MP rear shooter. It focus well on objects with the PDAF, and allows adequate light with the f/1.8 aperture. Front-facing images are captured by the 5MP selfie cam with f/2.2 aperture

The MediaTek Helio A22 takes on all the actions that you’ll require it to do, provided you aren’t a heavy gamer. It meets the basic requirements of an entry-level smartphone, and even tops it with the PowerVR GE8320 GPU in the graphics unit. Android 9.0 Pie and the Huawei EMUI 9 sort out the software details. Memory-wise, the 2GB RAM is paired with either 16GB or 32GB extendable storage.